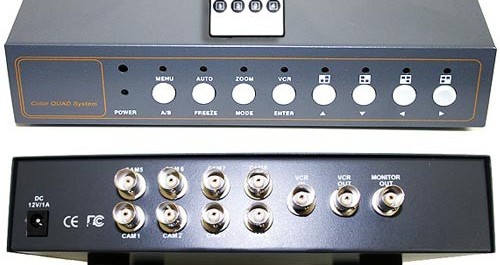 What is the difference between a Quad and a Multiplexer? They both allow us to display and record multiple cameras. Which is better? The answer depends on the application. A little history will help us to understand how both products arrived on the market.

In the beginning, a CCTV system consisted of a camera, a cable and a monitor. If you want to see a second image, get another camera, another cable and another monitor. It is easy to see that multiple camera systems can get expensive. You need as many monitors as you have cameras. If you want to record the camera images, you need a VCR for each camera. The total cost includes the equipment, the space to install the equipment and the manpower to watch the equipment. A simpler solution was needed. How do we solve the problem of displaying multiple cameras on one monitor and recording them on one VCR?

SWITCHERS: A switcher is a black box which allows you to take the inputs from several cameras, perform some electronic wizardry, then display each camera for a period of time on a single monitor. You can record the same image on a VCR. Switchers typically display each camera sequentially (that’s why they are called sequential switchers). The length of time each camera is displayed is controlled through front panel controls, or, internal jumpers. Switchers have been around for a long time and are still widely used in many applications.

SWITCHER ADVANTAGES: You get to see several cameras displayed on one monitor. You can record the same images on one VCR. You save installation space and monitor and VCR costs.

SWITCHER DISADVANTAGES: While one camera is displayed and recorded, the other cameras are not visible. Watching the sequential display for long periods of time could be a cure for insomnia.

SPLITTERS: Splitters allow you to display two cameras on one monitor. The same image can be recorded on one VCR. A single camera image is displayed on the full monitor screen. A smaller insert of a second camera is overlaid on the first image. This can range from a small picture in a picture to an almost equal split of the monitor showing the two images either vertically, or, horizontally. Splitters have been around for a long time and are still used in selected applications, usually where economy is most important.

SPLITTER ADVANTAGES: You get to see two camera images on one monitor. You can record the two images on one VCR. You save on cost of equipment and the space to house it.

SPLITTER DISADVANTAGES: The full camera images are not available for viewing as one image conceals the other. Some provide an elongated image, either two tall thin images, or, two short wide images, rather than the traditional image (ratio of 4 wide by 3 high).

OTHER DEVICES: A variety of devices provide system enhancements. These include devices for AGC (automatic gain control) to provide equal viewing intensity for cameras, video loss devices to indicate when the video signal is interrupted and alarm devices which associate hard wired alarms to a particular camera, to mention a few. Text inserters allow you to display titles on camera images. Motion detectors provide alarm outputs when movement is present in a camera image. More sophisticated devices combine several of the items mentioned so far into a single package.

QUADS: Quads take the images from four cameras, digitize and resize them to display on a single monitor and record on a single VCR. Some Quads incorporate additional features into a single package. Sophisticated Quads allow you to view individual cameras, sequence through the cameras and display all four images at the same time. There is often an alarm input for each camera, video loss indication and camera titling. Remote operation may be available. There are “two page” Quads which take eight camera inputs and display individually, sequenced and four cameras at a time (1-4, or, 5-8). Quads have been around for ten years, or, longer. They are still widely used in a wide variety of applications. There are lots of manufacturers making Quads.

QUAD ADVANTAGES: Quads combine several features into a single device, often allowing small system control from a single front panel. Four cameras are displayed on one monitor and recorded on one VCR (8 with dual page Quads). With standard Quads, all cameras are visible at the same time and recorded at the same time. There is considerable savings on equipment and space. You have better control of small systems allowing comfortable viewing for a single operator.

QUAD DISADVANTAGES: Recorded images are recorded in quad fashion. It is often difficult to view details from tape with a smaller image. Many Quads allow “zoom to full screen” on image playback, This expands the quad sized image to full screen for review. This image is usually considered inadequate due to lower resolution (the number of pixels, or, scan lines in the quad sized image is expanded to fill the entire monitor screen). There is little picture clarity remaining to view. With two page quads, only four cameras can be recorded at the same time. Sets of four must sequence to display and record.

MULTIPLEXERS: Multiplexers typically display the images of up to 16 cameras on a single monitor and record the cameras on a single VCR. Multiplexers usually incorporate several of the previously mentioned devices into a single package. Multiplexers are a convenient way for one operator to control systems with 16 cameras. A single monitor can display cameras individually, or, in multi-screen formats. All cameras are typically recorded to tape as full size images. This is accomplished by time sharing each image in sequence. Information is encoded in the recorded image which allows review of individual cameras from tape. Multiplexers have become widely used only during the past four years. Until recently, there were only a few manufacturers of Multiplexers.

MULTIPLEXER ADVANTAGES: Multiplexers combine numerous features into a single device (alarm inputs, video loss, camera titling, remote control capability, etc.). Because Multiplexers record cameras as full size images, tape playback is far superior to that of a Quad. Full size images are compressed in order to display several on the screen at the same time. Multiplexers typically allow you to view selected cameras while all cameras are still being recorded.

MULTIPLEXER DISADVANTAGES: The major disadvantage of a Multiplexer is that it is not “real time.” The more cameras installed, the slower the individual images update on the screen and to tape. This eliminates the use of Multiplexers in applications which require “real time” video. In order to playback a multiplexed recording, you must decode the tape through another Multiplexer. Multi-screen viewing of nine, or 16 cameras may require a larger monitor.

So much for history. Did you notice that “real time” was not mentioned until we got to Multiplexers? That’s because everything was real time prior to multiplexers. Explaining the difference between Quads and Multiplexers is a relatively recent phenomenon . So what is the difference and which one is better? The fast answer is that neither is better. Each is better for specific applications.

Quads are less expensive. They are well suited to an application with four, or, fewer cameras. It’s great for a convenience store. You can see four cameras on one monitor and record them on one VCR. What happens when you have five cameras? Five, or, more cameras can put you into a second Quad, monitor and VCR. So a nine input multiplexer starts to look more attractive, price wise. You even have more inputs for future expansion. If the customer can deal with the less that “real time” updates, this is probably the best bet. So either a Quad, or a Multiplexer can be the most cost effective alternative.

Have you noticed that I have been placing “real time” in quotes? That’s because it doesn’t mean the same thing to everyone you ask. For most people it means fluid motion. It can be 30 frames per second (60 fields) to anyone who was raised by television. Unless you were raised anywhere is most of the rest of the world where it is 25 frames per second (50 fields). If you go to a movie theater, the film speed is 24 images per second. Some even say it is real time if it is individual snapshots which are updating “as it happens.” All the world is visibly made up of a series of still images viewed closely together in time. Somewhere around 22 updates per second, our minds meld the still images into fluid motion.

You’ve probably heard buzz terms like, frame grabber, frame switcher and frame rate. The truth is that almost all the Quads, Multiplexers and Time Lapse Recorders used in the security industry are based on fields, not frames. There are exceptions, but, not many. The fields are typically “line doubled” to fill in the rest of the image. If you find yourself in a conversation on this subject with a potential customer, you’re already in trouble. I use the term “image” whenever I can get away with it. Image can mean field, frame, or, picture. The audience subliminally fills in the term they are most endeared to.

CONCLUSIONS: Both Quad and Multiplexer can be more appropriate depending on the application. If “real time” viewing and recording is required, a Quad is the only choice. Multiplexers can not accommodate “real time” applications. Where a clear image of an event played back from a security tape is the major requirement, a Multiplexer is the best choice. In most general security applications, Multiplexers are acceptable. Users are willing to sacrifice “real time” for the increased resolution of recorded images. The ability to control a system with 16 cameras from a single device is a major selling point. Savings on monitors and VCRs is substantial. Of the Quads and Multiplexers on the market today, those supplied by Sensormatic VPD (the Robot brand,) are considered to be of modern design, easiest to install, easiest to use and the most reliable. We have the lion’s share of the Multiplexer market.